A Method in Madness

As someone who has been trying to make sense of the Indian market for the last 27 years, I have consistently observed that in the Madness called the stock market there is a lot more Method than many people give it credit for.

“Though this be madness, yet there is method in ‘t”

The above line is the acknowledgement by Polonius about Hamlet’s behaviour in Shakespeare’s famous play “Hamlet”. But it applies to our markets as well.

As someone who has been trying to make sense of the Indian market for the last 27 years, I have consistently observed that in the Madness called the stock market there is a lot more Method than many people give it credit for.

At least definitely on a relative basis.

The banking sector in India has a natural way of categorization: Private-Sector (Private) Banks and Public-Sector (PSU) Banks.

I have divided all the listed banks in these two categories and aggregated the numbers. Thus, I can compare these two group as if there were only Two Banks in India: one in each category.

The PSU Banks have Assets which are 2.78 times those of the Private Banks 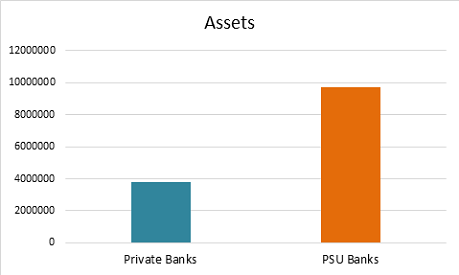 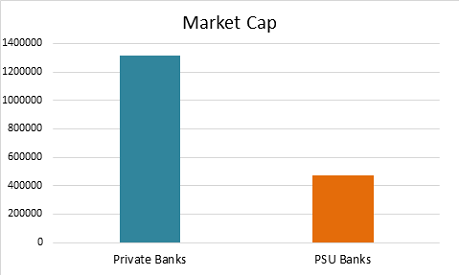 The main reason for this lopsided relationship is the Valuation.

The Average Price to Book Value of the Private Banks is 3.2x whereas the PSU Banks are trading at 0.8x their book 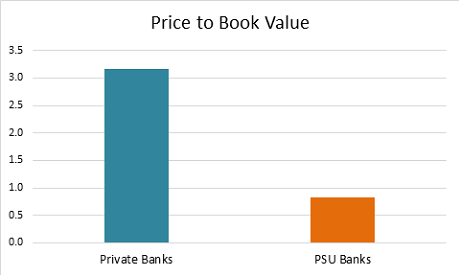 Why is the valuation difference so huge?

Is the market rational?

To answer that question, we need to understand what drives Valuation. I believe the valuation of a bank depends on three main factors:

The best Valuation measure is the simple Market Cap to the Book Value otherwise called Price to Book. Many analysts adjust the book value for valuation purpose, but the adjustment brings in subjectivity. I feel that the simpler the analysis without bringing in subjectivity the better.

We have already seen that the Price to Book of Private Banks is 3.2x vs 0.8x for the PSU Banks.

Profitability is best measured by Return on Assets (ROA). Some analysts like to use Return on Equity (ROE) but ROE can be increased by taking higher leverage, which may be increasing the risk. ROA captures core profitability and is not impacted by leverage. 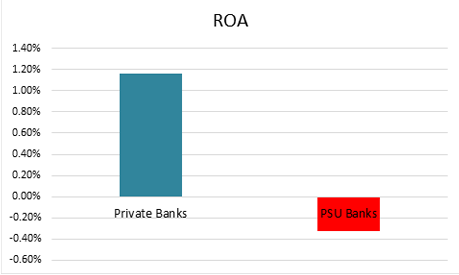 The data shows ROA of the Private Banks is 1.2%. The PSU Banks have made losses over the last four quarters. Their ROA is -0.3%. Clearly a huge difference.

Risk would depend on the quality of the Loan Book. Unless you are sitting inside the bank it may not be possible to do a detailed analysis of all the Loans given. The best proxy of Risk, I believe, is the historic Gross NPA. What I am assuming is that past problems are the best indicator of the future. 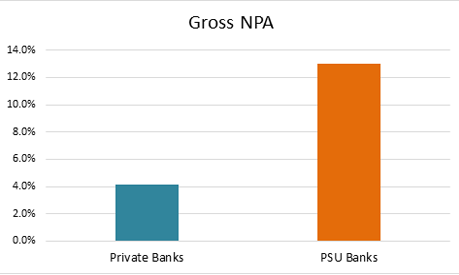 Again, the data shows that difference between the two types of Bank is huge. The Gross NPA of the PSU Banks are 13% versus 4% for the Private Banks.

There is more; While the Net NPA for the Private Banks is 13% of their Book Value, for PSU Banks they are 73% of their Book Value. Net NPA are that part of NPA which are not written off. 73% is a very high number. If for some reason these had to be written off, a large part of the Book Value of these banks would be wiped out. This was one of the major reasons for the Recapitalization that was announced last year.

Growth Prospects require forecasts. But as Niels Bohr, the legendary Physicist said funnily “”Prediction is very difficult, especially if it’s about the future.” However, given the large Non-Performing Assets of the Public-Sector Banks, one phenomenon that seems inevitable is that the Private Sector Banks will continue to gain market share from their PSU Counterparts. (Read More). In effect, the Growth Prospect of the Private Sector Banks is better than that of the PSU Banks.

Thus, Private Banks not only have much higher profitability, but their books are much less risky compared to their PSU counterparts. The growth prospects of the Private Banks are also superior. The large difference in the Price/Book Value of PSU Banks and Private Sector Banks should be attributed to all these factors.

Like Hamlet’s behavior, there is clearly a method in this madness

One issue is that this is an aggregate analysis, You may ask if this applies to individual bank stocks.

I will cover this in my next piece.

Sanjeev Mohta is the Market Expert at Marketsmojo. He has over 27 years’ experience in Investment Research and Fund management across Asian Markets and Asset classes. He has worked in various organisations in Singapore and India like Alchemy, QVT, Jefferies, ABN Amro and HSBC Securities. He Has a PhD in Economics from Tulane University, USA.